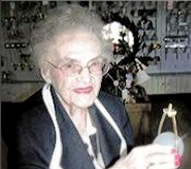 Marguerite M. Joseph was born on April 19, 1908 in Coniston, Ontario, Canada; daughter of Francis and Gertrude Robichaud. At the age of 17, Marguerite graduated from the Windsor Teachers Training School and began teaching French and English to first graders in Windsor for two years and then in Coniston for four years. After a brief courtship, Marguerite married John Joseph on August 24, 1930 at St. Maron Church with Father Michael Abdoo officiating and moved to Detroit, Michigan. Times were tough in the 1930's! Her husband John worked at his mother's grocery store and eventually they were able to buy it from her. Marguerite worked by John's side while raising their children. After years of hard work and struggle, they eventually began their own business in the electrical contracting field known as the Grosse Pointe Electric Company and eventually established Exway Electric and Supply Company and moved into its current location on Harper Avenue in Harper Woods, Michigan.

Marguerite began painting as a child, but with raising a family and working by her husbands side, her art took a backseat for many years. But as their business Exway developed, Marguerite was able to take some time now and then to explore her passion for art. Her husband John even added a room overlooking Lake St. Clair that she used as her studio. As Marguerite's passion for art continued to flourish, she became a member of the Grosse Pointe Artist's Association where she served as an officer. She also was a member of the Women's Artists Association and the Scarab Club of Detroit. Marguerite was also a founding member of the exclusive artist's group, Studio 10. Throughout the years, Marguerite won several awards and had many showcases throughout the years. And many of her pieces have been purchased by individuals and in fact one of her first paintings to be purchased was by the famous Detroit Tiger Broadcaster, Ernie Harwell and his wife Lulu.

As their children became more involved in the family business, Marguerite and John were able to take time to travel the world. They made trips to China, Korea, Japan, Italy, France, Vienna, Spain, Portugal, Taiwan, England, Sweden, Lebanon, Egypt, Syria, Mexico, many other countries and all throughout the United States and Canada.  They were also adventurous enough to be some of the few to take the Concord as well as travel on the Orient Express. Many of Marguerite's paintings were inspired by her travel experiences. One of her favorite destinations was Las Vegas, where her and John became regular frequent patrons of the MGM and Bally's Resorts. Marguerite loved casinos and loved to play the slots and continued to enjoy the casinos in Windsor and Detroit on a regular basis until the age of 104.

Marguerite and John were married for over 69 years and by each others side every day until John passed away in 2000.  She continued to stay active and remained President of Exway until her passing.

In 2011 at the age of 103, Marguerite and one of her Granddaughter's, Gail collaborated to start a Facebook page for Marguerite. Not only was this a way for her and Gail to spend time with one another, it was a way for Marguerite to keep in touch with relatives all throughout the US and Canada. Because Marguerite was legally blind, Gail would read Marguerite her messages on a daily basis and respond as Marguerite wished. A slight glitch that was discovered by Marguerite and Gail when setting up Marguerite's page was that it would not allow for them to enter in Marguerite's correct date of birth. Assuming that Marguerite was the oldest Facebook member, they chuckled about this and made some attempts to have Facebook correct the problem, but they never got a response until one day a local reporter got wind of the issue and decided to do a story about it. Marguerite's Facebook story not only went National, but it went International. She was featured on just about every television station and newspaper world wide, not to mention she was the number one trending story on the websites of Yahoo, MSN, AOL and CNN. Needless to say that Facebook almost immediately issued a formal apology and had the problem resolved the next day. She also received a special personal gift from founder, Mark Zuckerberg. Since then, Marguerite has received thousands of personal messages from people all around the world letting her know what an inspiration she is. She recently officially became a part of Pop Culture as she was featured in a question on the television game show "Who Wants To Be A Millionaire."

Marguerite was a proud and devout Catholic who prayed the rosary daily and whose faith was remarkably strong. She was thought of as a wonderfully sweet lady who was always "dressed up" with her hair and makeup always done. She was known for her kindness and generosity and the great love that she had for her 5 children, 12 grandchildren, 28 great grandchildren, extended relatives and friends.

Marguerite M. Joseph passed away at the age of 105 years old on July 30, 2013 in her home with some of her loved ones by her side.

"You are my Sunshine, my only Sunshine!"

Many of Marguerite's paintings and prints are available for exhibition or purchase. Please feel free to browse her Gallery.